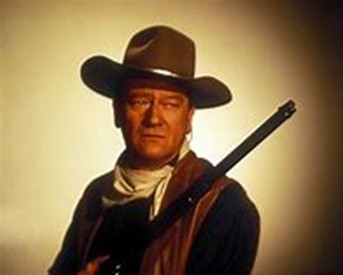 One hundred fifteen years ago today marked the birth of Marion Robert Morrison. We know him better by his professional name, John Wayne. This iconic Hollywood star appeared in 142 motion pictures during the entertainment industry’s Golden Era. He often portrayed a rugged hero that helped instill an American image of bravado and strength.

The “Duke” starred in many westerns, portraying solid inspirational leaders in our nation’s frontier days. Whether on the western front as a lawman, a courageous soldier, or other law enforcement officer, John Wayne always seemed to have a firearm on his side. That tool of the trade was used to protect and defend, never to maim or take innocent lives. A famous quote from the 1969 movie “True Grit,” in which he won the Academy Award as best actor, his character as a cankerous one-eyed marshall says, “I never shot nobody I didn’t have to.”

Horrifically, our nation has strayed far from looking up to gun-toting movie characters fighting for justice to a numbing reality of hate-filled lunatics and terrorists routinely firing bullets into crowds of innocent victims. Without the potential threat of an unprovoked massacre, it is no longer safe to walk into a school, a shopping mall, a concert hall, a supermarket, or a house of worship. And, there is no false impression that a John Wayne type of character will swoop in to save the day from the carnage.

I reluctantly speak out on gun violence prevention issues because, unfortunately, my voice is likely to be added to the chorus of politicians and talking head commentators who flood the media with hollow sound bites after each bloodshed. Sadly, the platitudes of indifference and inaction raise anger among fearful Americans yearning for safety and protection. I struggle. I struggle because I have no answers to explain the madness.

I shared my frustration with a spiritual advisor who reminded me that human beings cannot understand things that make no sense. So what makes someone act to take innocent lives? Anger, frustration, mental illnesss? The infamy? The spectacle?  It is far beyond a philosophical debate between the right to bear arms and licensing firearms. It surpassed political posturing long ago. There is no comprehensible way to reconcile the fact that nineteen parents will have to bury their children in Texas over the next few days.

But, maybe the latest incidents (unfortunately plural) are a reminder that every person has access to love and forgiveness straight from the source. What is beyond our human comprehension is divinity. Use this source for comfort. Direct the hard stuff there. Senseless acts of violence are not for human beings to make sense of; they are not new. Jesus counts among Himself a place in history among the slaughter of innocents. It may give us comfort to remember that he counseled us to love one another. That is our directive, during these times of trauma and grief and as well as in the good days. Be gentle with one another and with yourselves. And when the burdens get too much to carry, remember to ask the lord to carry it for you.