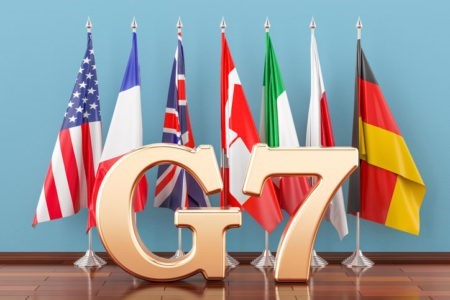 One year ago today, U.S. President Joseph Biden made the first foreign trip of his administration to attend the G-7 Summit in the United Kingdom.

The G-7, also known as the Group of Seven, is an organization of leaders from some of the world’s largest economies, including Canada, France, Germany, Italy, Japan, the United Kingdom, and the United States. Other nations are occasionally invited to join them for their meetings. (Russia had been a member until it was permanently suspended in 2021 for invading Crimea. At that point, the group was known as G-8.)

Then-U.S. Treasury Secretary George Schulz initially formed G-7 in the 1970s as the “Library Group.” The finance ministers from France, Germany, the UK, and the US gathered regularly for fireside chats to discuss how they could collaborate in stabilizing global currency fluctuations. When two of the original participants became presidents of France and Germany in 1975, the gatherings transitioned to meetings of heads of state.

A summit is a meeting of heads of government. Though they do not typically have binding or legal authority, the gatherings offer a setting for exchanging ideas, coordinating policies, and building relationships that may result in greater respect and trust for one another. Last year, the G-7 participants agreed to a global provisional limitation on corporate tax rates at 15 percent.  This year’s annual gathering in Germany later this month will likely focus on international finance concerns.

Summits are not limited to world leaders. The church’s governance, called ecclesiology, holds weekly summits. Through the gifts of the Water and Word, you are baptized as a leader of the church. As such, you are always welcome to the church’s Sunday summits for worship. Join us to collaborate with fellow believers and build relationships filled with respect, trust, and, most importantly, with the Lord. Good Shepherd, Plainview, holds its summits each Sunday at 8:00 AM, 10:15 AM, and 6:00 PM. We look forward to welcoming you, especially this week for Trinity Sunday.